A close comparison between the female and the male universe, summarized by the dialogue through the universal consciousness. This is the essence and the gist of comparison between the sensibilities of Galiano, Biondo, Carnaghi and Sokolovski. Four European artists with a path of international exhibitions. Four different artistic mediums.

Elyse Galiano was born in 1980, in Strasbourg, France; she lives and works in Brussels, Belgium. After her training in applied arts in Strasbourg, she studied fine arts in Besan.on, a French city, where she completed her master’s degree in 2004. Her artistic work weaves together tailoring and installation. Elyse treats natural hair using them as materials for sculptural installations. Her particular use of hair is due to an explicit interest in female history and the role of women in society.

Nazareno Biondo, was born in Turin in 1985 and completed his artistic training at the Albertina Academy of Fine Arts. Since 2008 he has participated in national and international sculpture symposia, winning prizes and competitions and creating monuments. In Biondo’s work, Carrara marble becomes a reflection on time and on the concept of abandonment, drawing inspiration both from commonly used products and from the consumerist icons of our time. In this way, a series of objects that are recognizable and incredibly unbelievably reproduced in marble are explained in marble.

Riccardo Carnaghi, was born in Legnano in 1993, artist and architect, he is graduated from the Milan Polytechnic. Alongside the professional practice, he studies an artistic research with the awareness that the architectural project must be treated as a work of art. His artistic production is then a continuous analysis of the themes that characterize architecture with the intention of using this knowledge in order to enhance its aesthetic research. His works, present in private collections in Europe, America and the Middle East, can be defined as an analisys of the forms of architecture through the figures of the human body.

Krzysztof Sokolovski, was born in 1985 in Eišiškės in Lithuania. Since 2003 he lives and creates in Poland. He graduated from the University of Technology of Gdańsk (Faculty of Energy Engineering) and the Academy of Fine Arts in Warsaw – Faculty of Painting. With his artistic research path he creates neosacral art: paintings, luminous objects, installations and monumental painting. His approach is extremely modern – reinterprets the traditional icon, remaining faithful to the old technique and craftsmanship precision, thanks to which the work exudes spiritual and material beauty. Sokolovski’s works can be found in museums and private collections in Poland and abroad. He is the author of several monumental polychrome walls, the most important of which is the neosacral chapel in the Convent of the Salesian Sisters in Jerusalem.

The exhibition, in the three main rooms of Villa Brentano, traces an analysis of the two universes, male (visualized by Biondo’s sculptures and Carnaghi’s graphics) and female (Galiano’s installations), with their contradictions and problems, included in the contemporary urban context. All this is summarized by Sokolovski’s last reflection on the universal consciousness, which unites and projects towards higher dimensions, parallel universes, subtle entities… 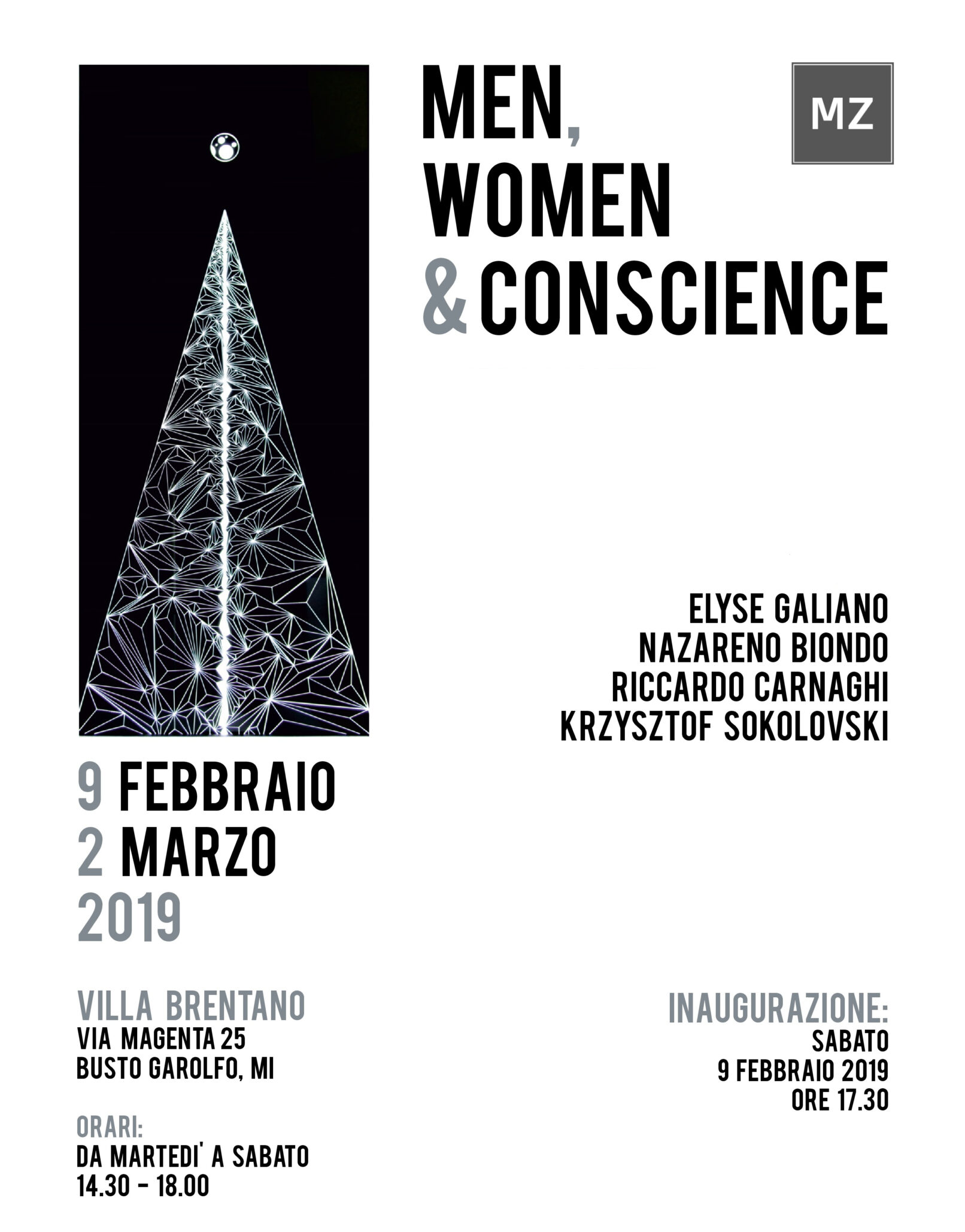